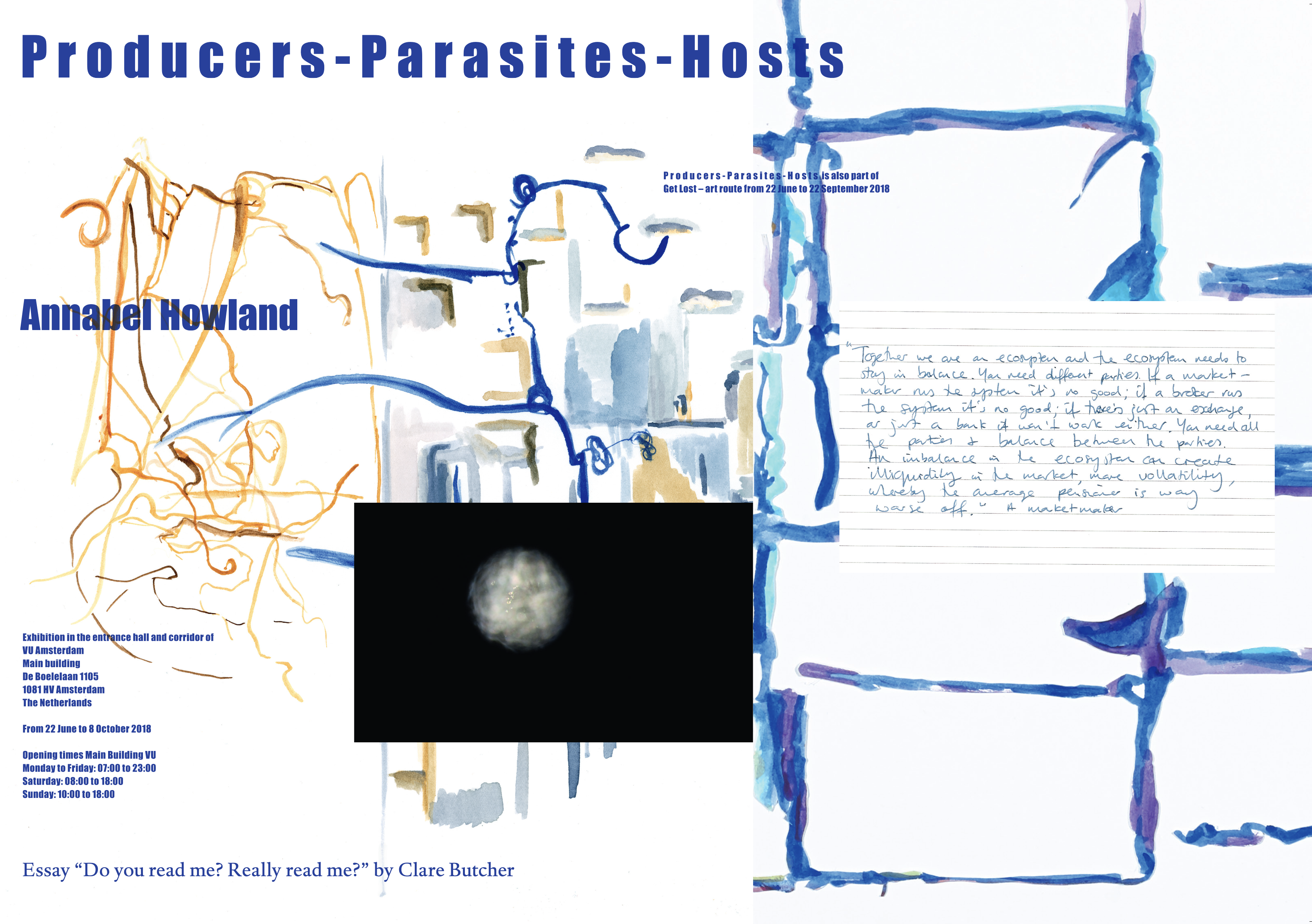 A certain literacy is needed to understand some matters. Money matters. Money matters and also the surprisingly (and sometimes disturbingly) related ecologies of scientific and artistic research. It’s their abstraction, you see (and don’t see). Their symbolic agility. The power of words which operate in these spheres to shape the imagination and with that, perspectives on reality. As philosopher Franco “Bifo” Berardi reminds us, money and language “are nothing and yet they move everything. They are nothing but symbols, conventions, flatus vocis , but they have the power to persuade human beings to act, to work, and to transform physical things”.1

It is within this web of interrelated agencies, actors and things (organic and man-made) where Annabel Howland’s Producers – Parasites – Hosts entangles itself. Since the time of the global financial crisis in 2008, working closely with a number of specialists such as evolutionary biologist Toby Kiers and econometrist Albert Menkveld at VU Amsterdam, and London-based economist Tony Curzon Price, amongst many others, Howland has traced and traded narratives leading from “stories of lasers, kidneys and chemical compounds [to] microbial cooperation and human debt.” 2

Over various iterations Producers – Parasites – Hosts has morphed from performative lectures accompanying edited sonic records of interviews with key players in this story at the Athens Biennial (2013); to handmade schematic gouache paintings, textual quotes and petri-dish renderings at the Pompgemaal in Den Helder (2015); a publication entitled fungi , a light box with mycorrhizal fungi in a plant root and sound piece Centipede Game – On Cheating at Kunsthal 45 (2015); and more recently, a triangulated mapping of community garden collaboration in Het Rode Loper Festival (2017).

Throughout this evolution, Howland interrogates the practice of hosting within institutions and nature together with the intimacies of survival between fungi and the market – which are, in the end, not dissimilar. As fungi evaluate their host organisms by their capability to provide sugar, the notion of corporation comes to mind as one entity becomes efficiently colonized by another – making the relationship between host and the hosted increasingly malleable.

The shifting scales of the project’s manifestations speak to Howland’s insistence on making legible the precarious conditions in which many live, breathe and work. Her inscriptions of handwritten, microscopic, as well as seemingly invisible macrostructures, materialize her research process while also reflecting on the monetary value of aesthetic display in a changing art market. The money is also here.

While we are in the space, let’s see and listen. The entrance hall you’re in features a number of window panels displaying fragments of the visual research outlined above, as well as four one-eared headphones. Two by the entrance hall windows and two by the windows opposite the student information desks. The soundscape is vast and varied, traversing the project’s previous edits via subjects like “pigeons, to flags, to cables, to microwave dishes on towers, information dark spots and flash crashes, dark pools, transparency and lit markets.” 3 There’s a lot to hear. And you will have four months to dip in and out of the ongoing conversation. To read and think the material differently.

Back to legibility. The specialization of language required in many fields (otherwise called “jargon”) can often seem opaque and even exclusive. Isn’t opacity sometimes more useful than transparency though? According to Andy Haldane, the former Head of Stability and now Chief Economist at the Bank of England, the number of global financial languages is so vast it quite possibly exceeds the number of spoken human languages. Haldane also notes that, “a common language is known to increase dramatically bilateral trade between countries, by more than 40%.”4

There is, however and as always, another reading. One that’s more risky, more ambiguous, more messily political in its ambitions. Poet and philosopher, Édouard Glissant’s praise for opacity provides a useful counterpoint in and through the efficient, dark-pool workings of global markets. Glissant places non-transparency next to not-knowing and the fear that this generates within an Enlightenment-indoctrinated world. He asks whether – in a contemporary time, full of complication and contradiction – the West will move towards a more entangled approach to the world in a participatory way, or one that’s still based on “old impositions”. 5 “Even if,” he says, “we should have no illusions about the realities, their facts already begin to change simply by asking this question.” 6 By seeking a relation to things unknown, to difference, to the opaque, we invite the possibility of multiplicity which is a poetic force, one that opens up rather than closes down relationships. And which, as “Bifo” reminds us is a force in “excess of language…a hidden resource which enables us to shift from one paradigm to another.” 7

Bringing us to the context of this particular commission at the Vrije Universiteit, Amsterdam and the not-so-poetic relation of education to debt. In Fred Moten and Stefano Harney’s work on The Undercommons: Fugitive Planning & BlackStudy they observe that as opposed to credit, which is asocial, “debt is mutual. Credit runs only one way.” 8 And while the pressure of debts to society are commonplace amongst fugitives, students, artists, the colonial “politics of debt without payment, without credit, without limit” remain largely intact, 9 and often without regret: “Everything I did was within the rules…the blame lies elsewhere…the system went wrong” as one interviewee in Howland’s archive describes the post-crash attitude of those who contributed to it.10 There is an evolutionary dilemma at work it seems between the allowances of “the system” and the site of learning. To this dilemma, anthropologist Anna Tsing asks, “How do lovers of fungi practice arts ofinclusion that call to others? In these times of extinction, when even slight acquaintance can make the difference between preservation and callous disregard…we might want to know possibilities of vernacular science, that is, knowledge production in which ordinary people can participate.”11

It is in this participative entanglement that we find ourselves Producers, Parasites and Hosts of poetic indeterminacy: an indebtedness which can and should be negotiated with the power of a vernacular literacy which is at once capable of reading, knowing and relating across different paradigms.
Clare Butcher