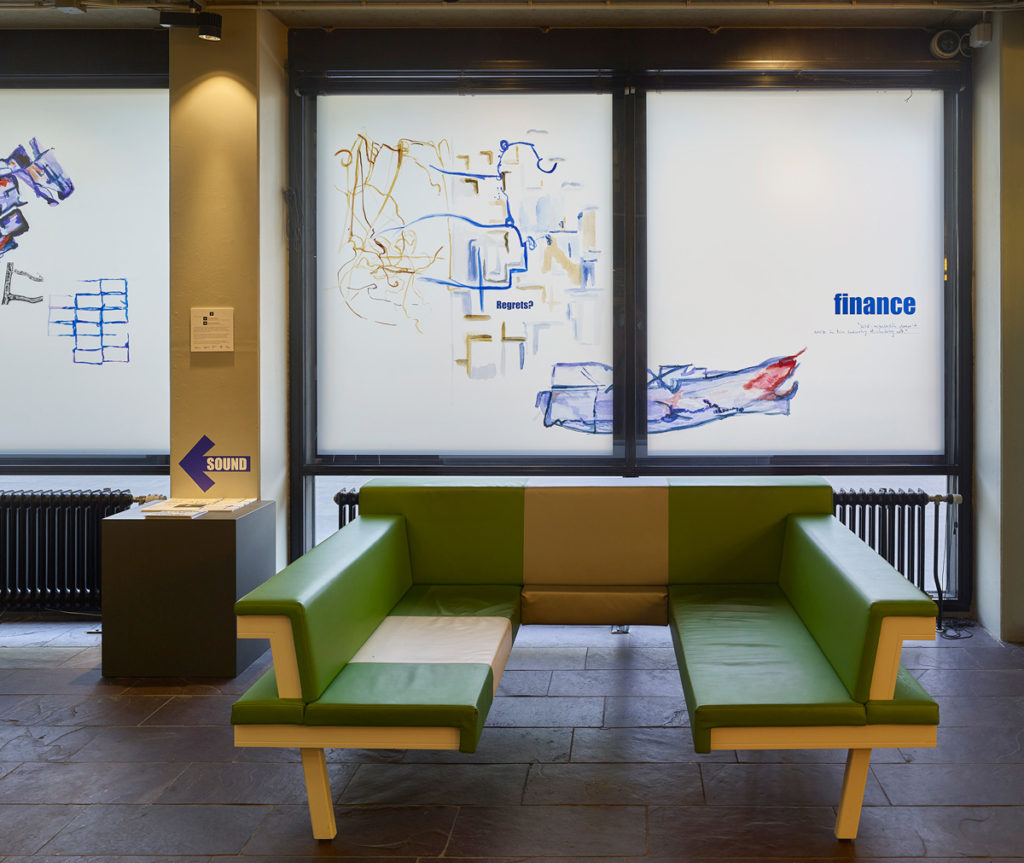 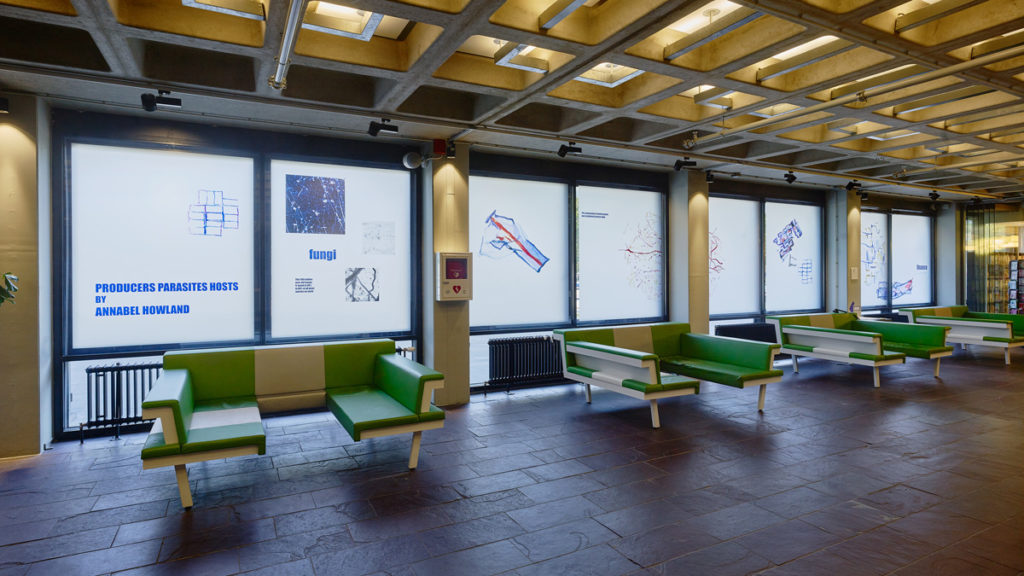 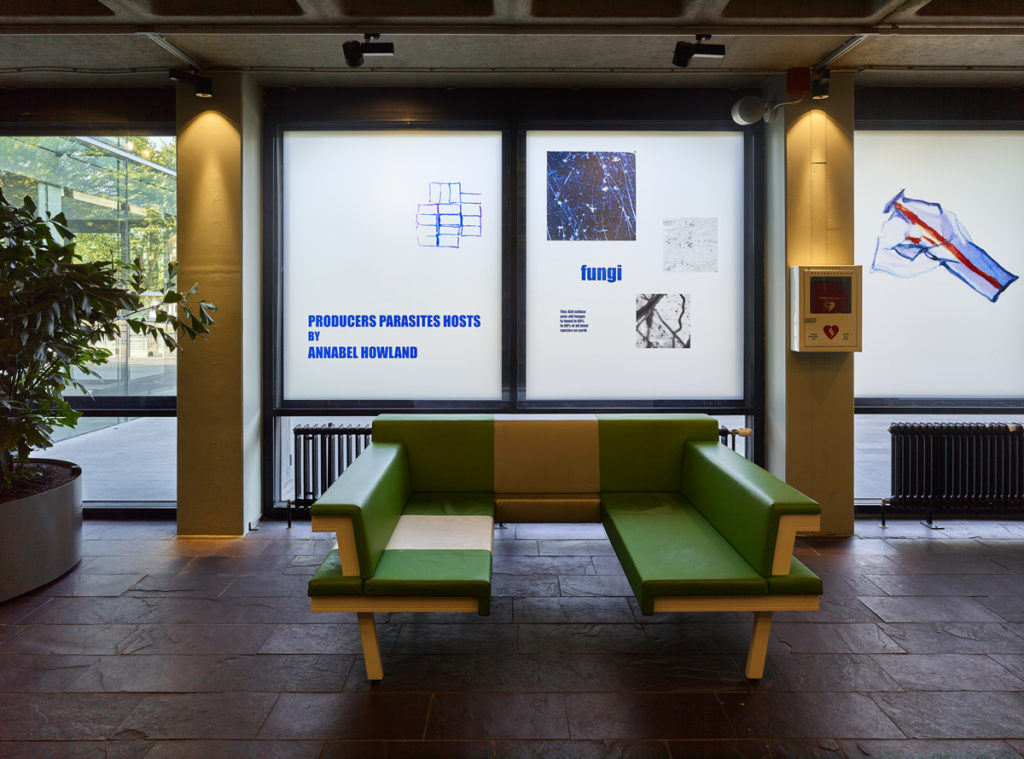 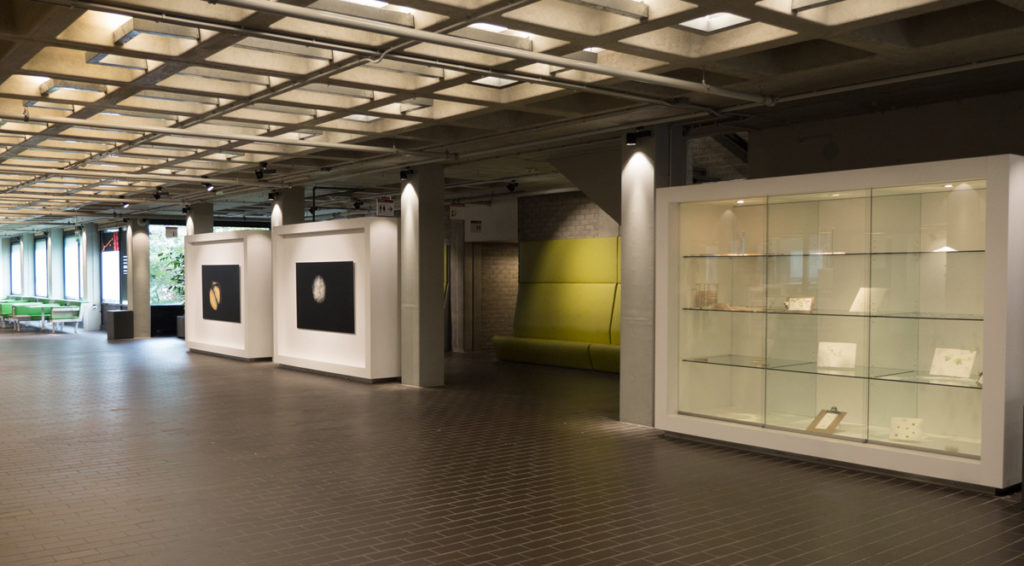 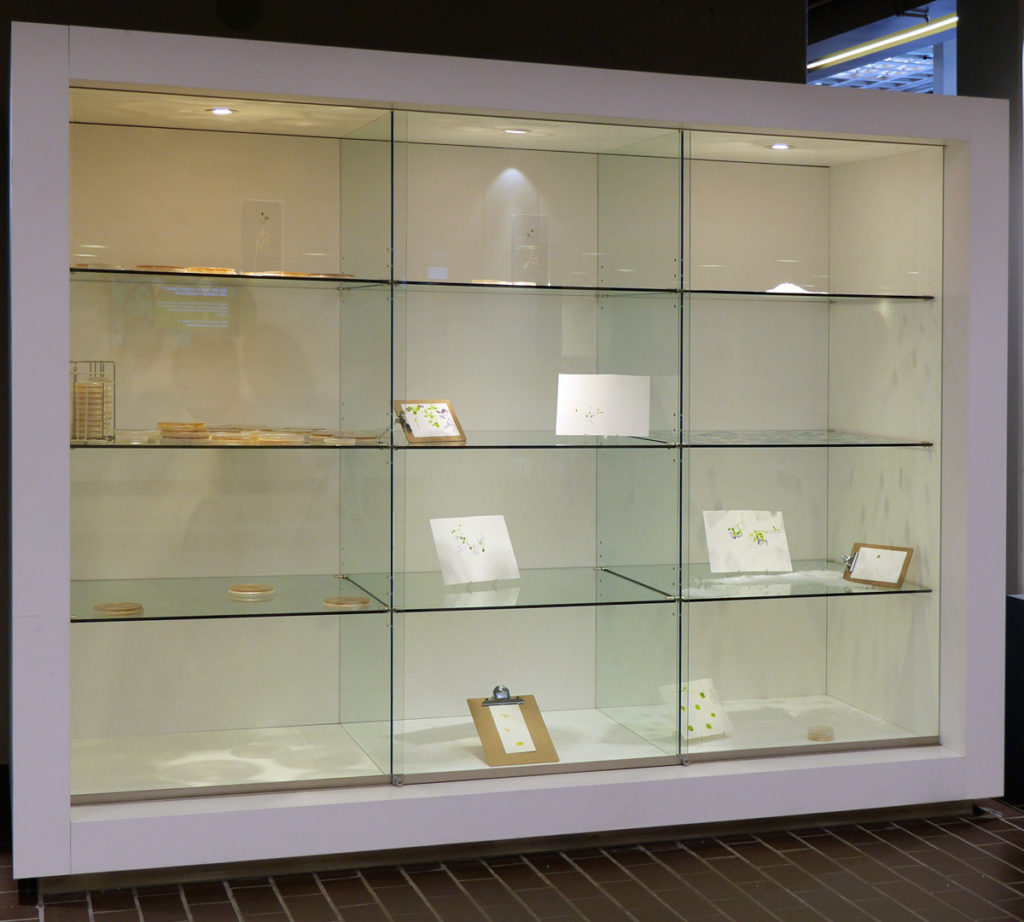 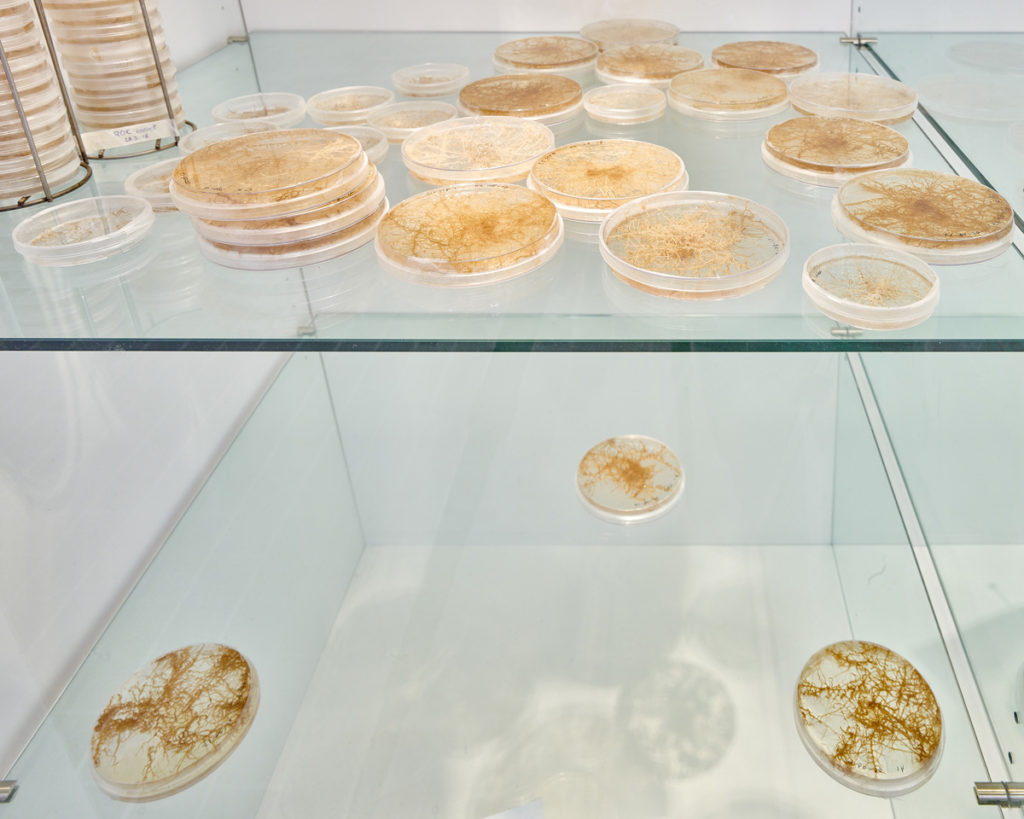 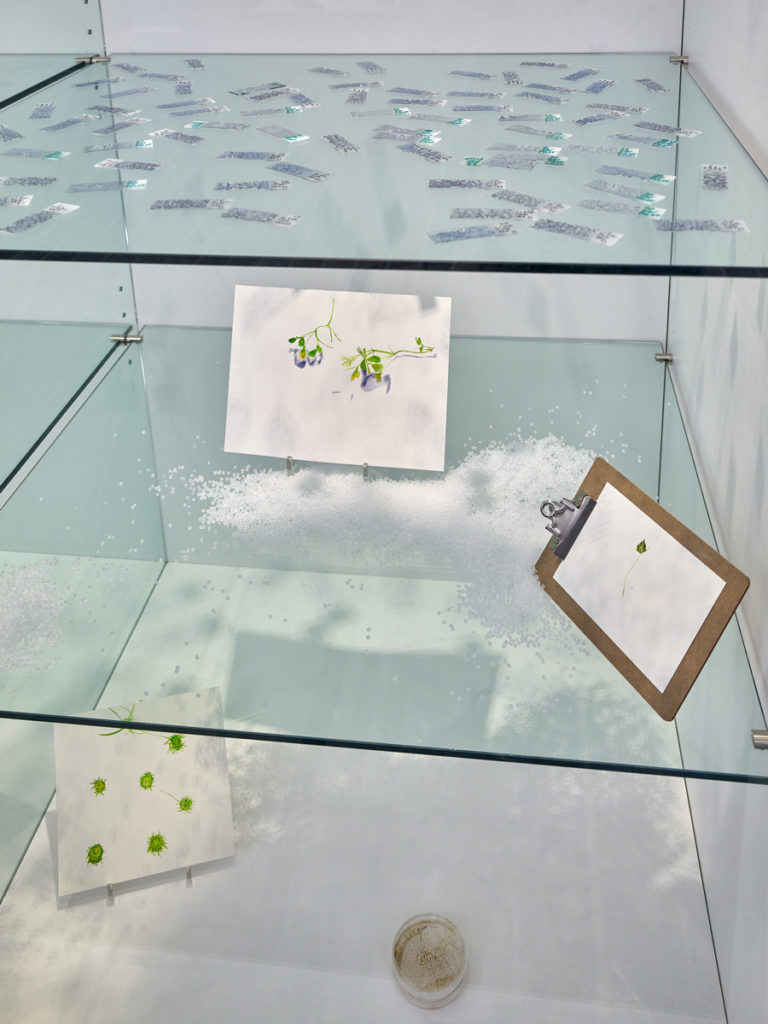 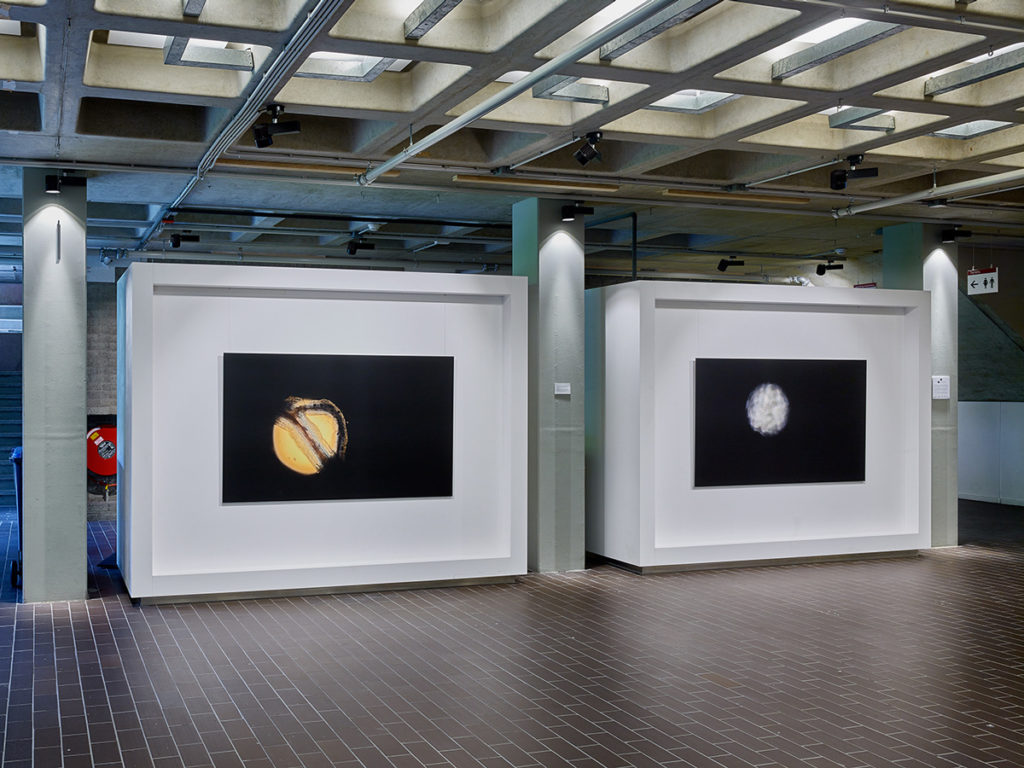 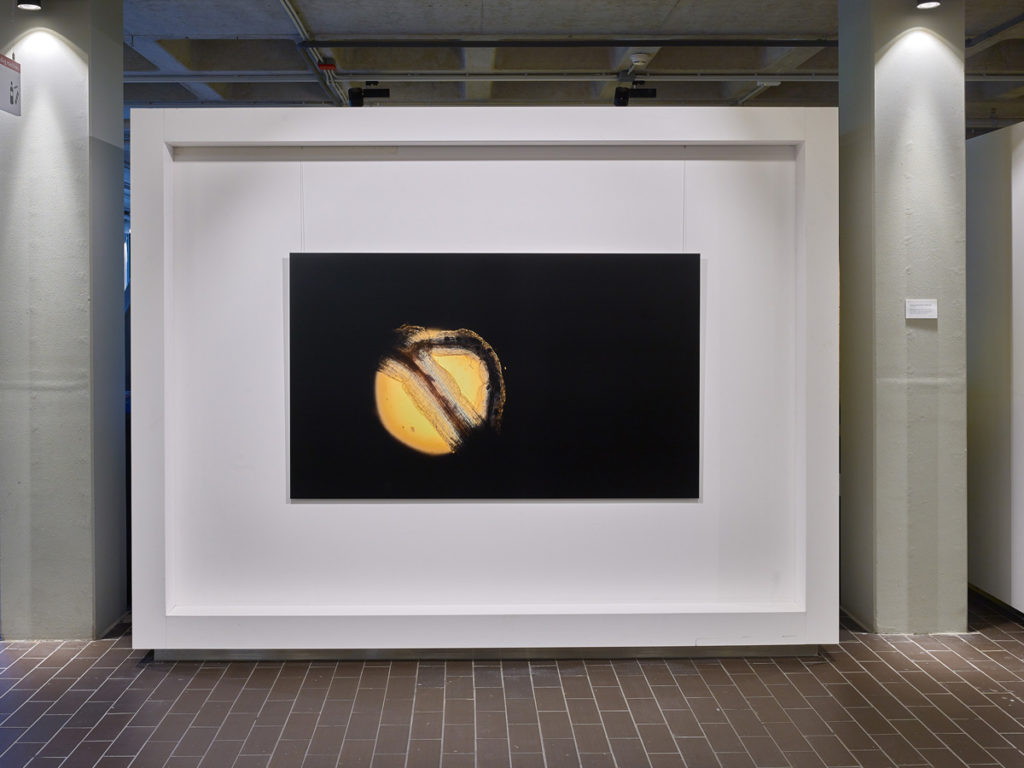 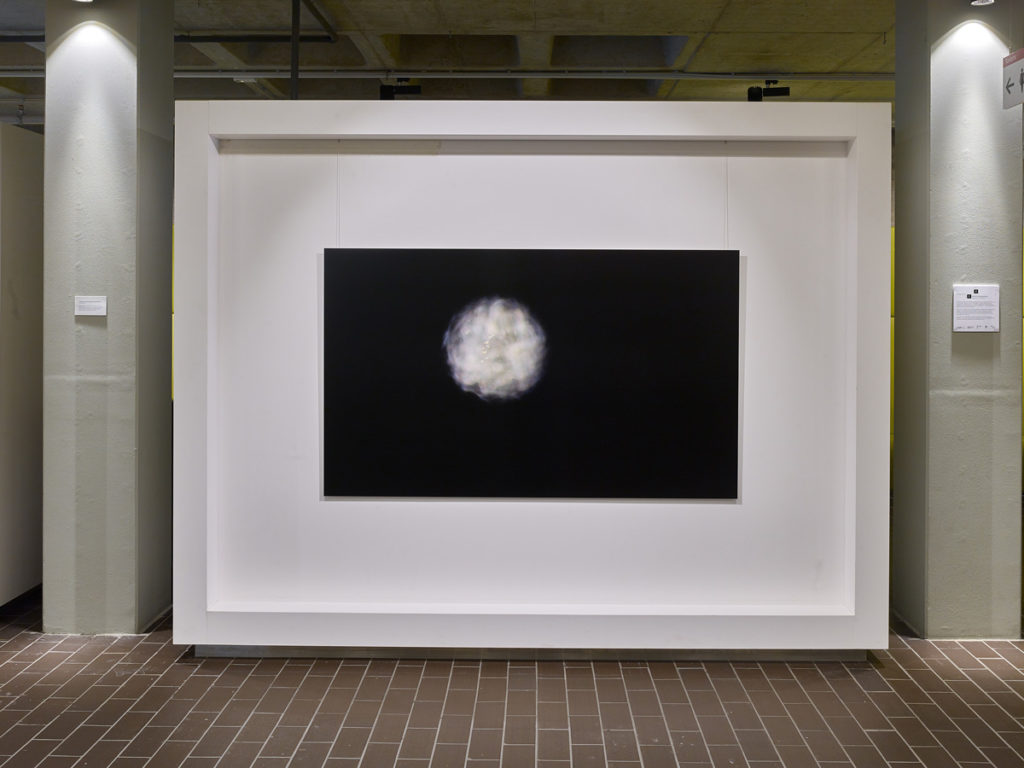 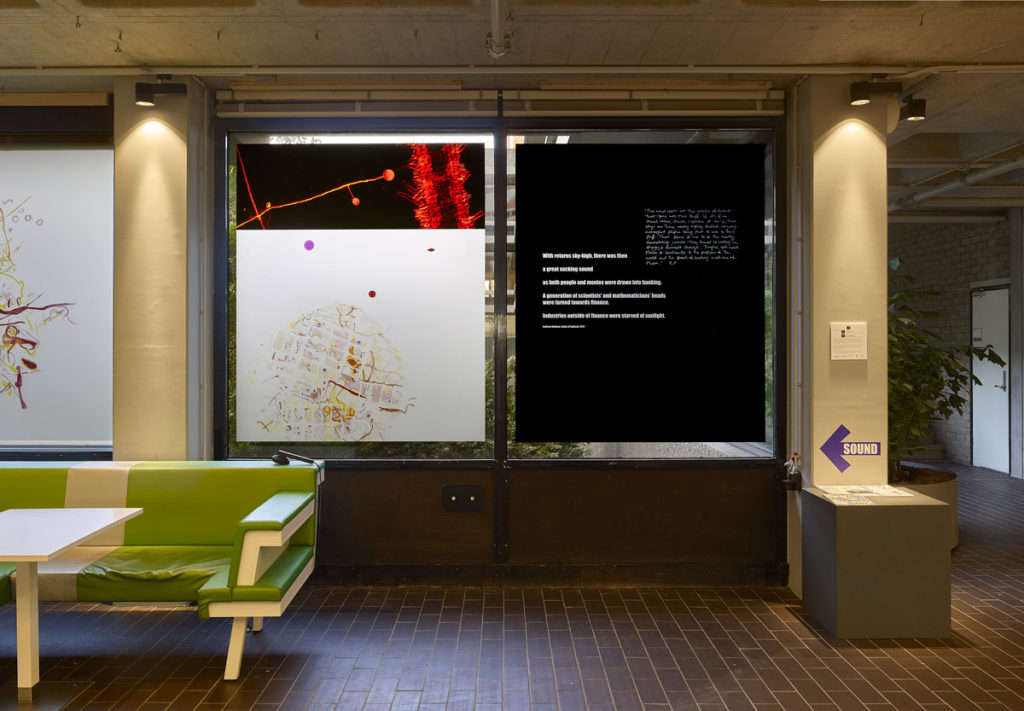 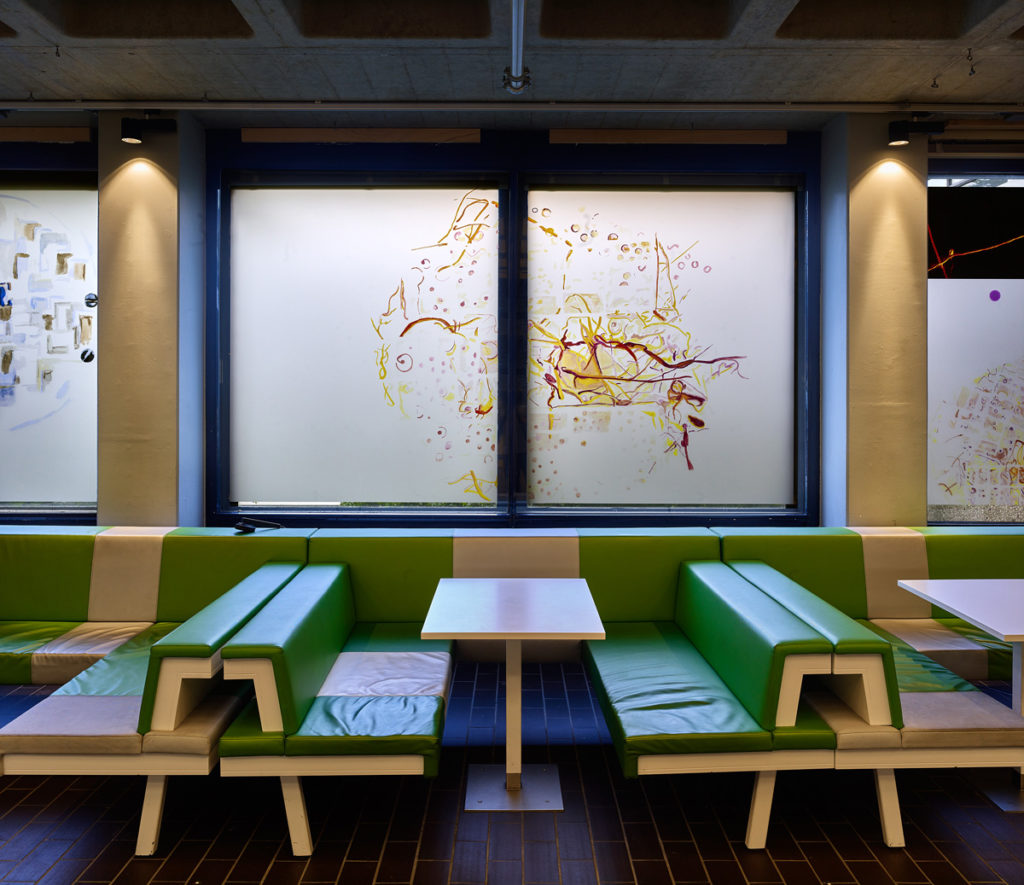 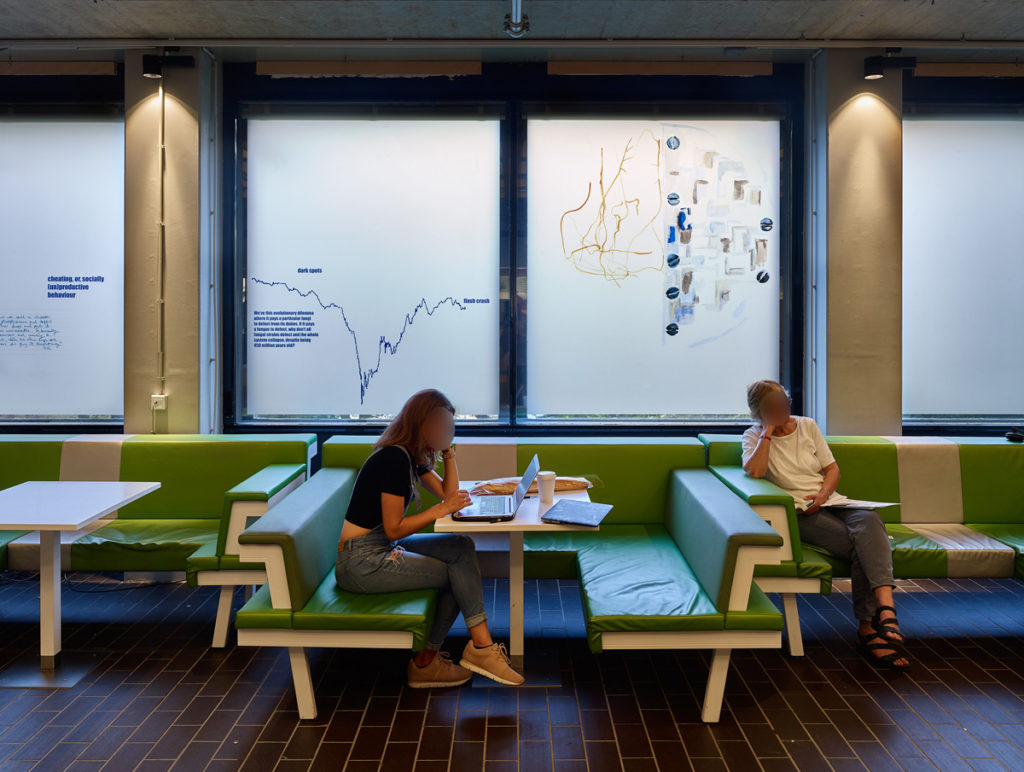 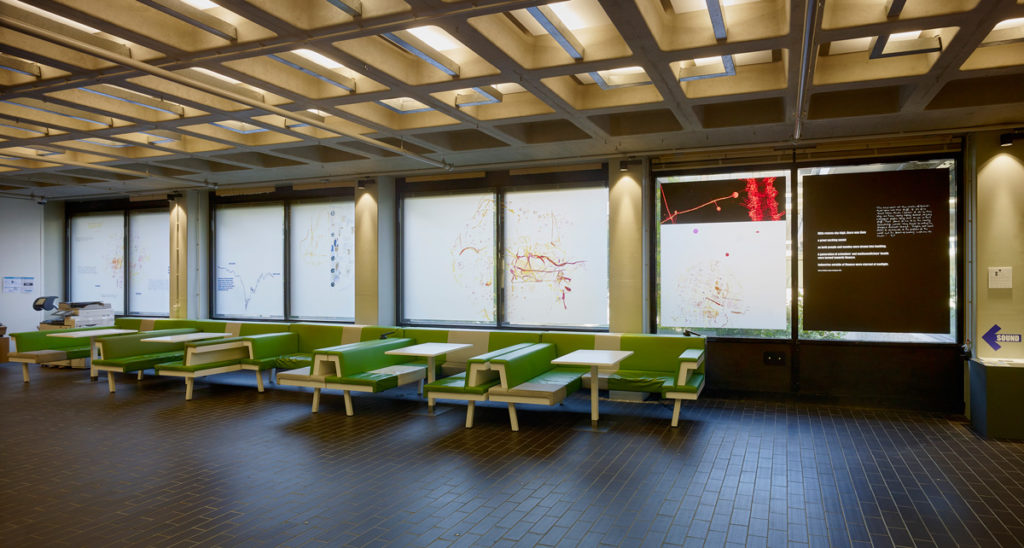 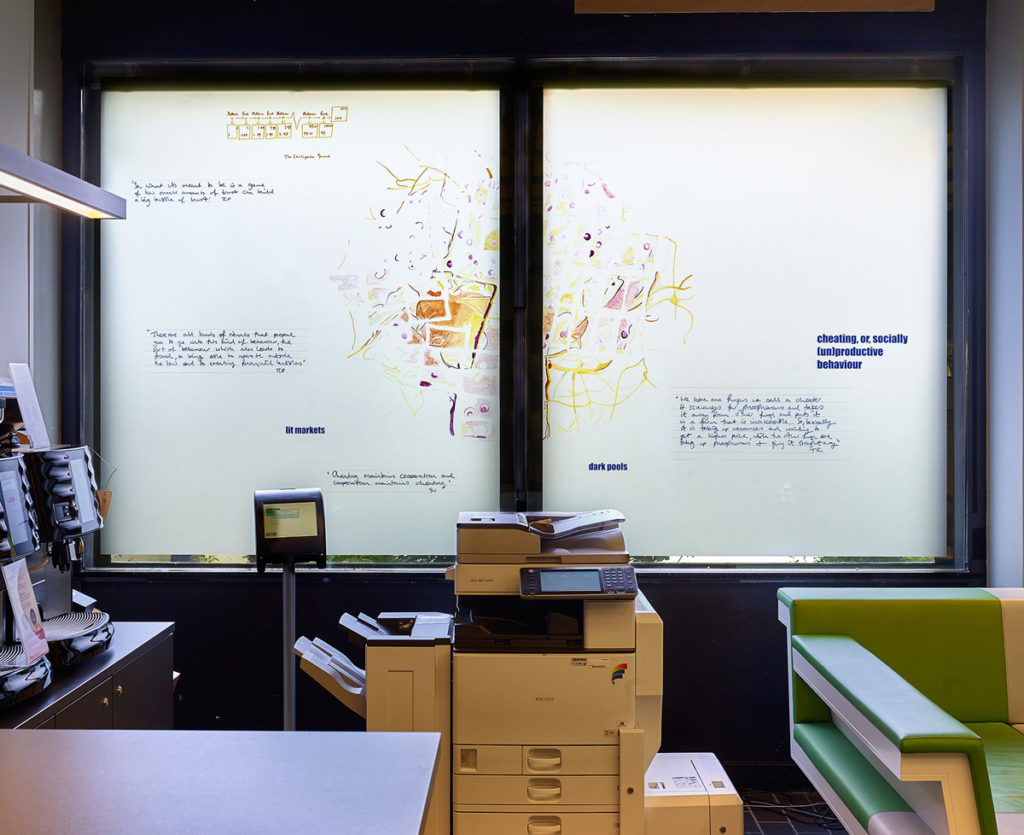 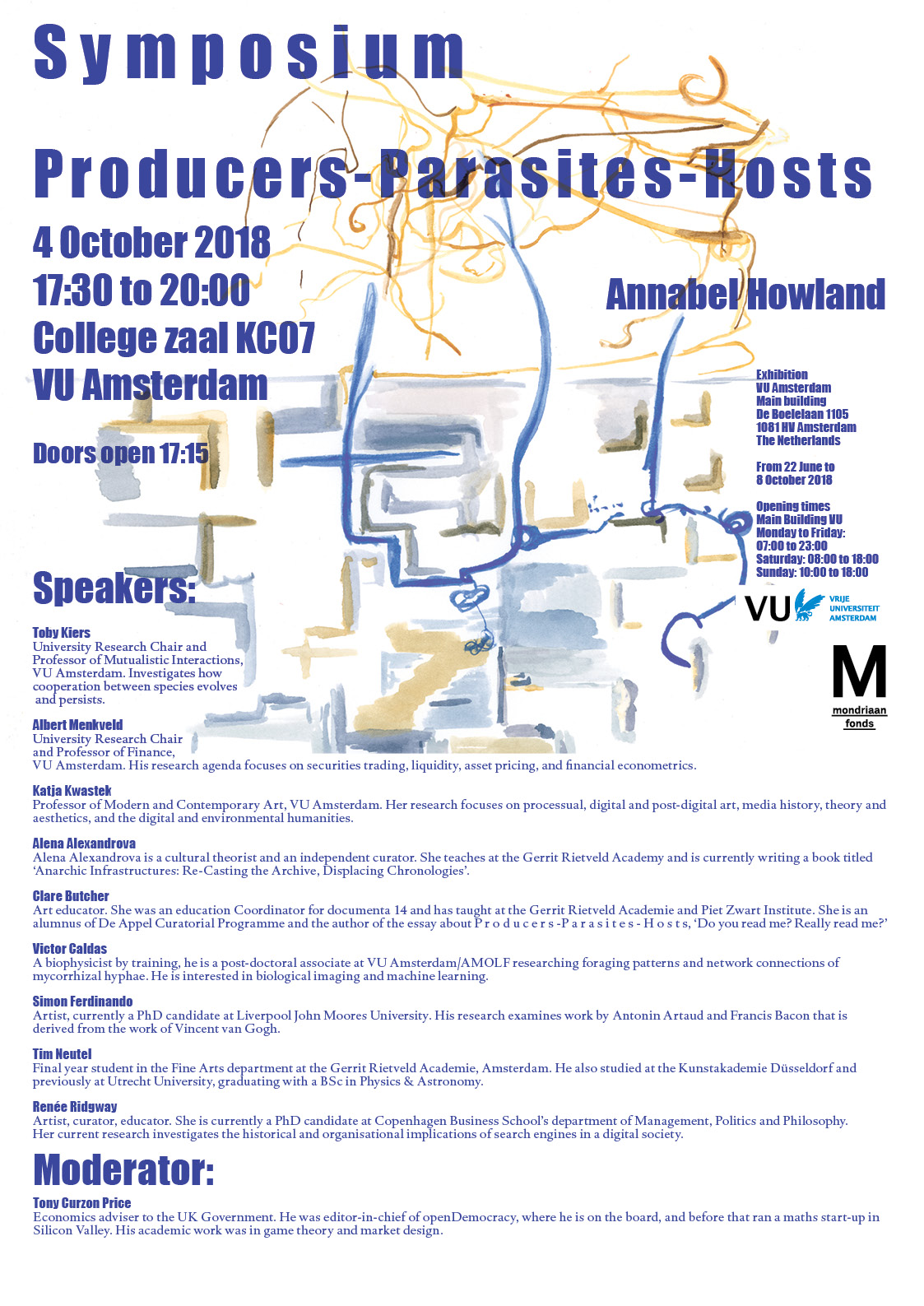 Sound from the installation in VU Amsterdam.
This edit was made for a busy, noisy thoroughfare.

Annabel Howland’s artistic research weaves a speculative web connecting art, science and finance. In her ongoing project Producers-Parasites-Hosts, such themes as cheating and cooperation, transparency and instability, profit and loss, intermingle with stories of microbial cooperation, dark pools and human debt. The multimedia presentation at VU during GET LOST – art route concludes this phase in her research. The installation in the central hall and corridor of VU’s main building comprises drawings and text printed on translucent film mounted on the windows, audio, photographs, plant roots and more.

Prompted by the consequences of the 2008 global financial crisis, Annabel Howland launched this research-based art project in 2012. These conversations have given rise to a multitude of forms – from paintings, diagrams, texts and publications to lectures and sound installations – presented over recent years in various contexts.

Throughout Producers-Parasites-Hosts, Howland has followed closely research by VU Professor of Mutualistic Interactions, Toby Kiers. Kiers has drawn on economics models for her research into the trade in nutrients between plants and fungi in the soil. Howland broadened this conversation by engaging with VU Professor of Finance, Albert Menkveld, around his work on flash crashes and robotic trading.

Artists and scientists explore the world at fundamental levels, driven by a deep curiosity about the substance of life and matter. The creative process of examining a subject from different angles and passing it through a range of media and artistic languages opens up new perspectives for the viewer, for imagination, and for nuanced reflection.

Clare Butcher wrote the essay to accompany the exhibition Do you read me? Really read me?

This installation was commissioned by VU Amsterdam and was generously co-funded by the Mondriaan Fund.

GET LOST – art route generates art in public space by partnering organisations in Amsterdam’s commercial district, Zuidas, with artists. For this edition the artists were invited to reflect on the idea of CODE OF CONDUCT.

GET LOST – art route 2018 received generous support from VU, AFK, Zuidas, City of Amsterdam, and the Mondriaan Fund through its programme Experimental Regulations.

For the map, audio work and the most up-to-date information on the programme, tours and performances, go to www.getlost-artroute.com