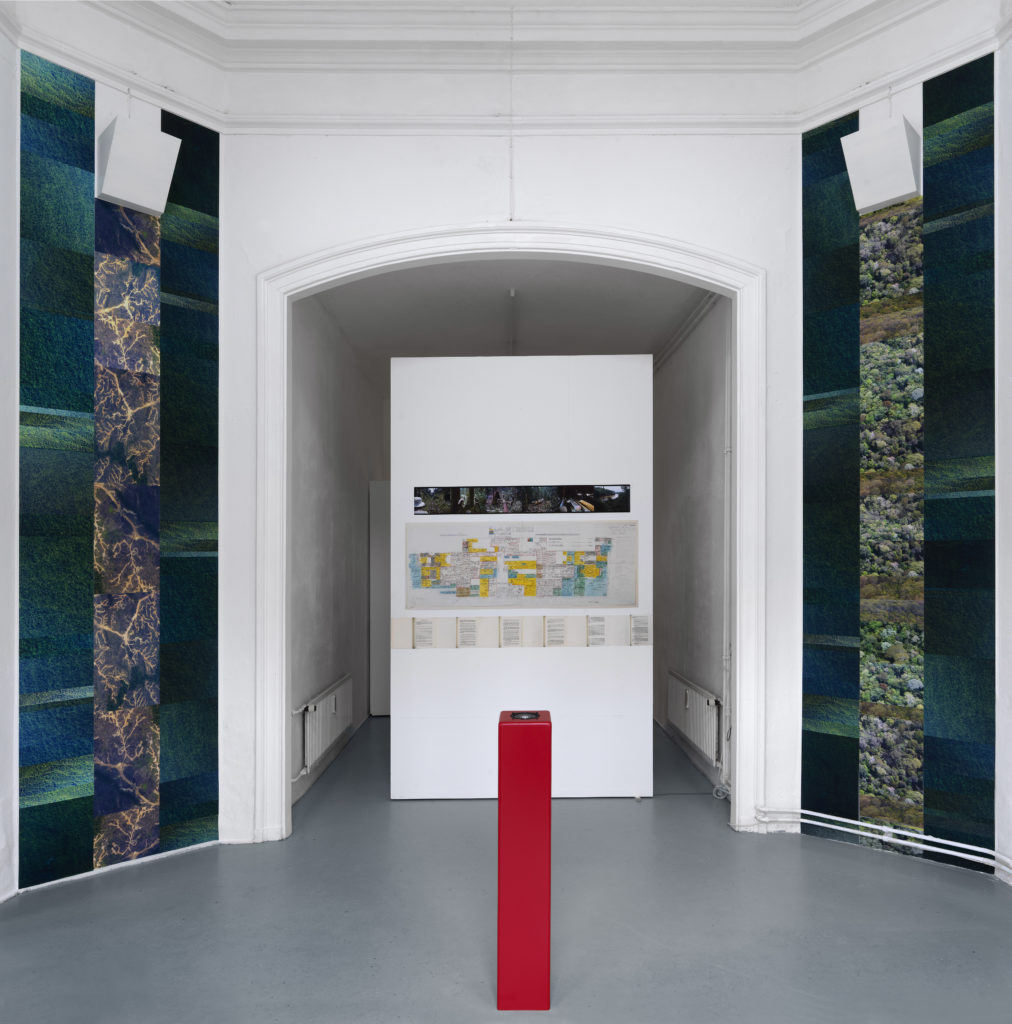 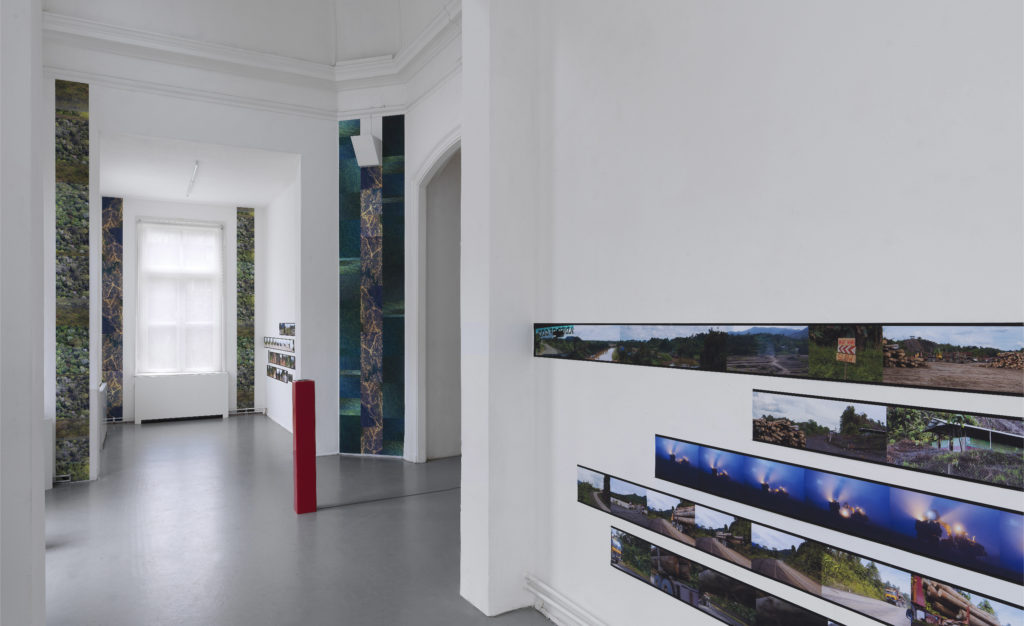 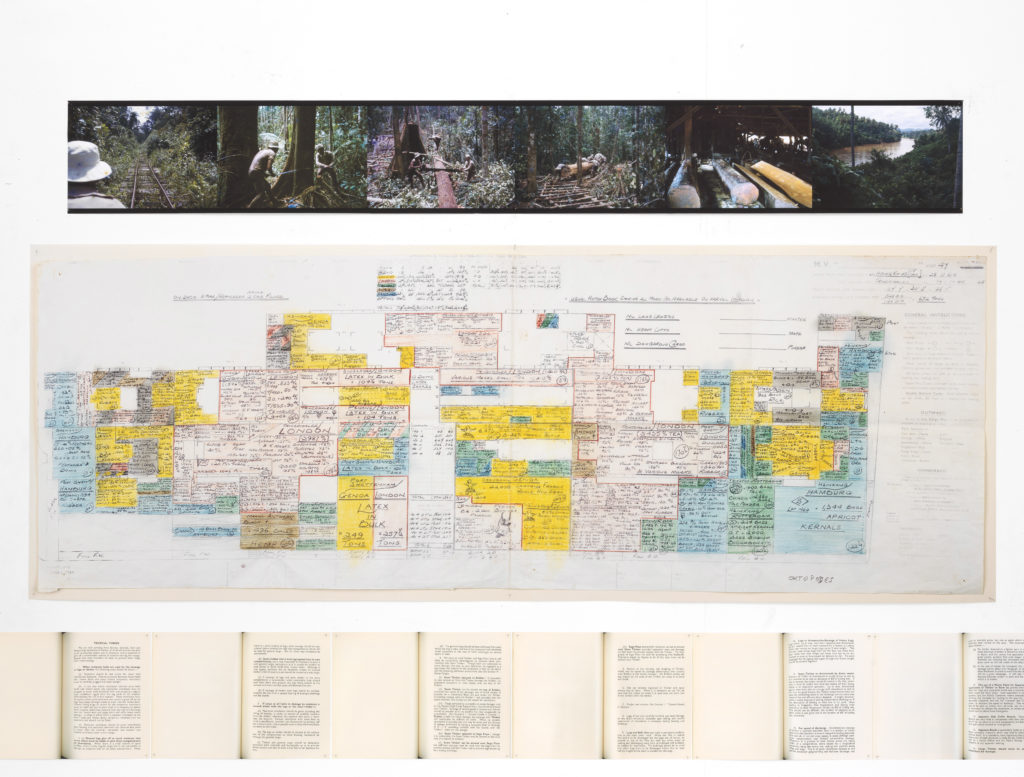 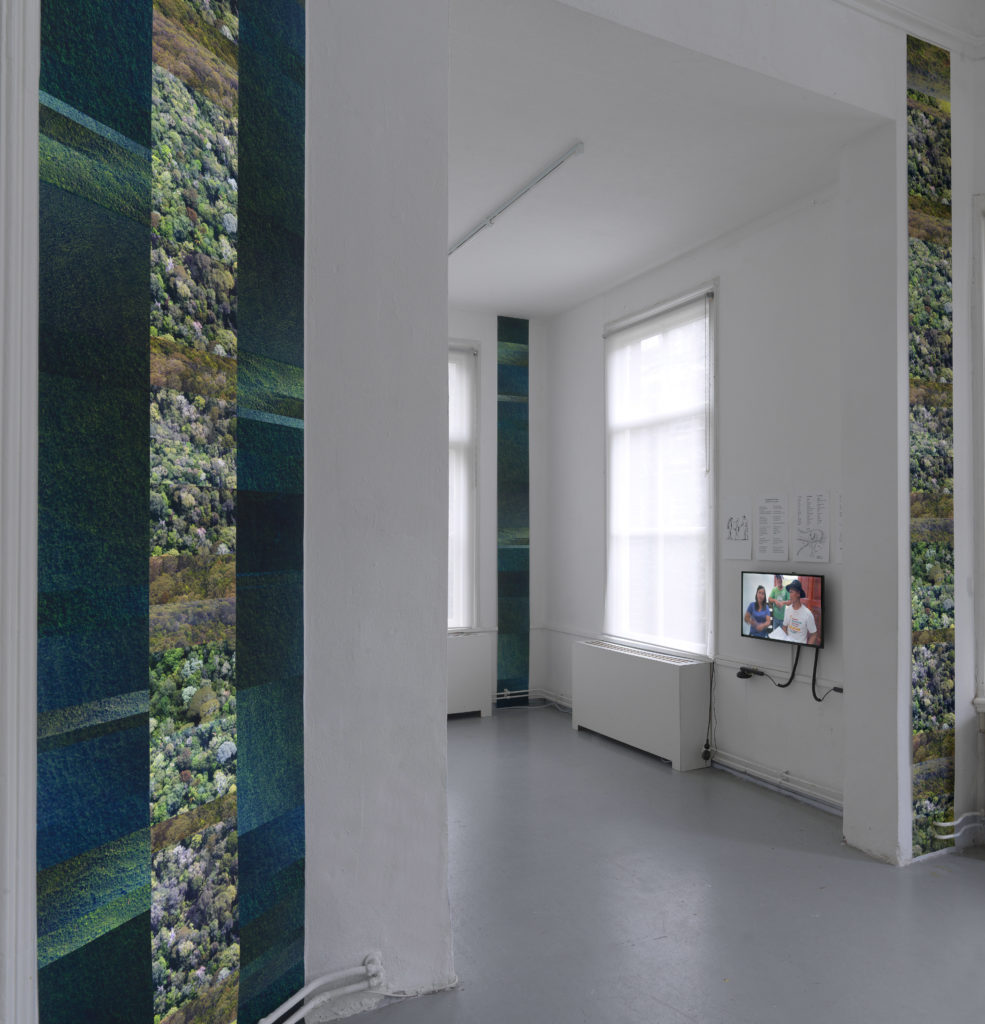 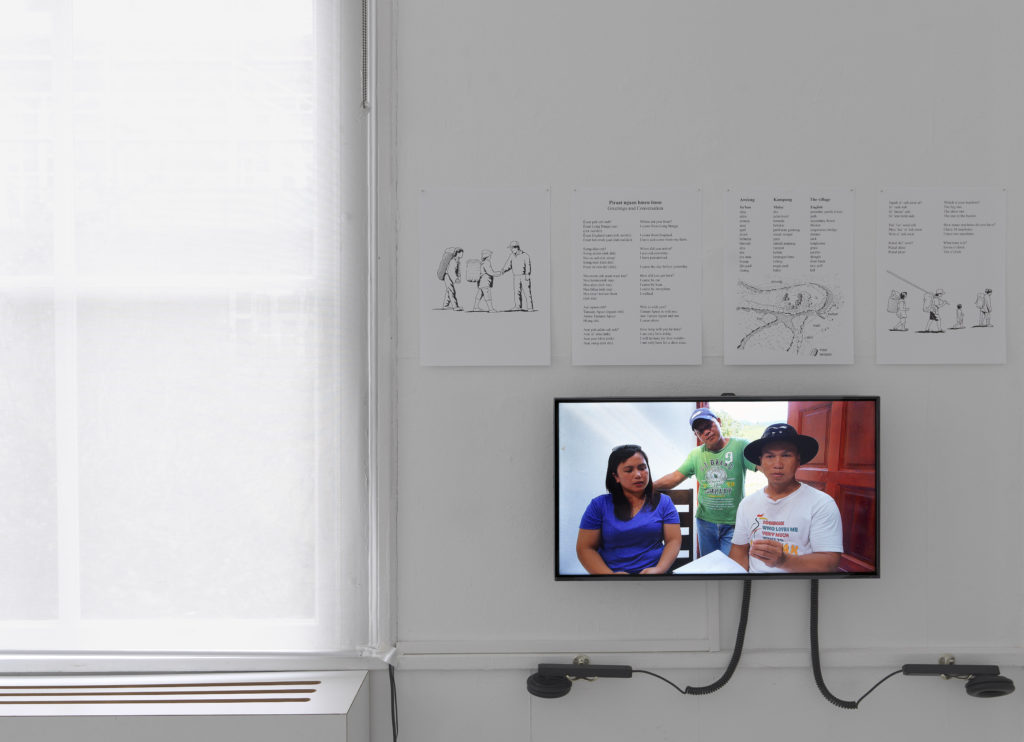 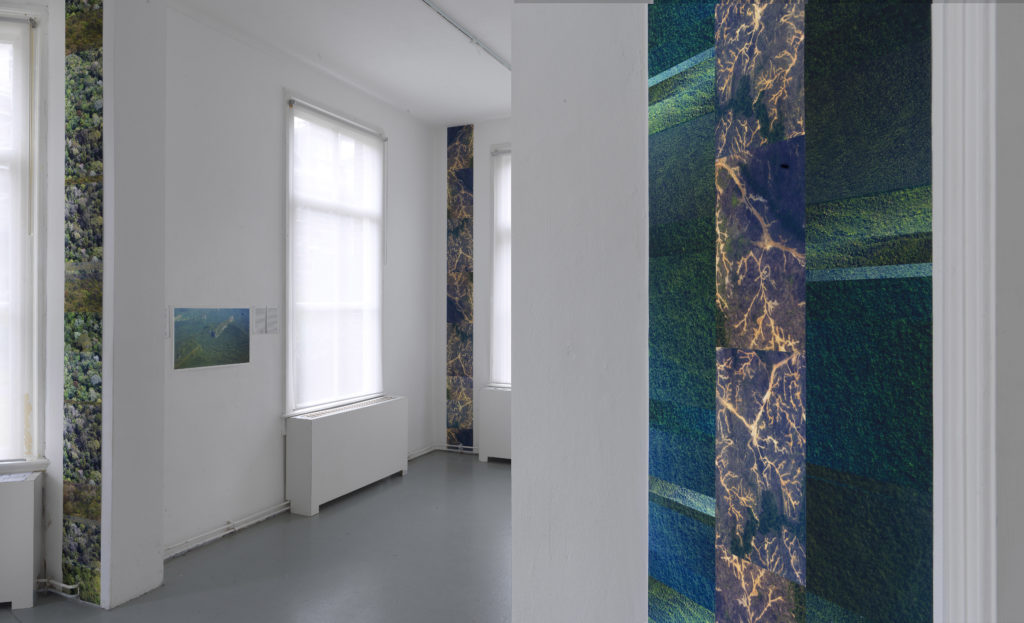 Mark That Maps Itself: On Roads That Lead Nowhere

by Alena Alexandrova, based on her lecture about Annabel’s work and this exhibition in particular.

FOREST – a living network, vertical, and thick, creates its own climate.

TREE TRUNK – its rings are a record of time, circular and layered, they become visible only when the tree is cut, at the moment of its death.

FALLING – the change between vertical and horizontal states associated with becoming dead and motionless, but also with becoming transportable.

STACKING – the piling up of different materials and commodities, which previously belonged to different contexts, in order to store and transport them. This results in a strange form of flattening. Flattening is an entropic process.

FLOWING – mobility, resistance to containment, but also relating to leaking and flooding.

FOLIAGE – immersive environment, impenetrable surface to blend with and disappear.

ROOTS and root-like structures – should never become visible, or brought to the surface. When they do become visible, they form a network of marks that can signify stasis and death.

Durn That Road (2019) by Annabel Howland is a work that witnesses a journey to an island and its people, gestures, words, animals and plants. The installation consists of material collected on journeys to Borneo. A constellation of vertically and horizontally organized photos and film stills, field recordings, an interview and documentary excerpts together compose an installation that outlines the invisible flows of capital that determine the visible devastation of a landscape.

Durn That Road does not narrate, it is not exactly a travelogue, nor is it a field study. It articulates the visibility of the complex forces that determine an unfolding ecological disaster in a grid-like structure composed of horizontal and vertical planes. The verticals are formed by a constellation of aerial views showing expansive networks of roads that penetrate the land, but lead nowhere. The logging sites and roads form a strange flat, root-like structure that grips the land, transforming it into a barren, surveyable territory. The vertical collages also show aerial views of the forest as a thick surface of tree crowns; a deep green, soft pattern. They suggest the structure of sedimentation, or geological layers that form in deep time and resonate with the living time of one of the oldest rainforests on the planet.

The installation includes field recordings of the sounds of the forest and their modulation through the process of deforestation. The ambient sound of the forest changes in texture depending on where the logging sites are, so one can literally hear the flattening in the texture of sounds. The voice of children reading a dictionary of a local language Sa’ban, resonates with the sounds of a land gradually losing its voice with the destruction of its forests. In a filmed interview shown on a screen, three Sa’ban people discuss how the new road connecting their village to the city is changing communal living and their relationship to money. The interview captures a similar process of flattening, or erosion, that affects the delicate social networks of extended families and their everyday lives. The semi-nomadic use of land by family groups gradually transforms into a more settled use of the land, often nearer the road. Roads improve access to education and paid work, but also to building materials, leading to a dilution of social relations as families begin to live in individual houses instead of communal longhouses. Game hunted in the forest can now be sold, instead of shared with the community. The horizontal penetration of the land for the use of its resources causes its social textures to fragment and flatten, and perhaps, over time, brings about the gradual loss of complexity in its local languages.

An enlarged bulk cargo distribution diagram and pages from a ‘cargo notes’ instruction manual from 1964 describe how raw materials from across southeast Asia – timber, latex, apricot kernels, frozen rabbits, chicken eggs, and many other commodities – were to be stowed in ships’ holds for export to Europe. Composed of verticals and horizontals, the diagram and notes articulate a language of capture, of translation of the land into goods and materials, and point to the shallow, accelerated time of trade, the export of materials, and to financial flows. Horizontals and verticals form the generic infrastructure of grids, and grids establish an abstract, homogeneous flatness that is very different from the folds and crevices of a space understood as an environment or a habitat. Living trees become horizontal logs. Verticals converted into horizontals mark a loss of complexity; a transformation of complex, dense planes of a habitat into surveyable surfaces and, hence, death.

Horizontals and verticals relate to different types of visibility and embodied experiences. Being in the forest, in an environment composed of vertical trees, implies a relation of immersion. In contrast, a view from above captures the land as a horizontal, observable, mappable surface. This cartographic view establishes a territory as an abstract plane, it “abstracts” it into a virtual model, an informative capture of a territory with its network of roads. But in Durn That Road the photo collage of aerial views of the networked marks of the logging roads are not a representation of the roads on the island; they are very concrete and in a sense tautological; they are roads with no other function than the extraction of resources, and they signify nothing other than their own presence. They chart a map of disaster, not a place; they are a mark of destructive and invisible flows of financial capital and corruption.

The composition of vertical and horizontal planes resonates with the rhythm of two temporal perspectives, more precisely with their clash: the accelerated time of extraction and destruction and the deep time of one of the oldest rainforests on earth. This marks a crisis of human self-understanding under the conditions of technological modernity, which brings acceleration and complexity, but is also an entropic process of flattening. Durn That Road does not exactly produce a documentary or investigative report. Rather, it creates an open fragment that witnesses different aspects of forces that simultaneously build and ruin. And it witnesses the accelerated rhythm of resource extraction, which results in a future that fails before it is reached. Howland’s practice observes and articulates the visibility of speculative interactions between a range of complex systems which, though not usually visible, are always omnipresent.

The title, Durn That Road, quotes the character Anse Bundren in William Faulkner’s 1930 novel As I Lay Dying. Anse is introduced to us through his rant against a road he finds threatening, mainly because it brings people (i.e. the taxman) to his door, but also because of its implicit demand for movement. “When He aims for something to be always a moving, He makes it longways, like a road or a horse or a wagon, but when He aims for something to stay put, He makes it up and down ways, like a tree or a man.”

For her exhibition at Bradwolff Projects, Annabel has developed a multimedia installation, which takes as its point of departure a road through the rainforest in the state of Sarawak on Borneo (East Malaysia). This logging road started on the coast and was gradually extended through to villages near the border with Indonesia where Sa'ban is spoken. Dr Beatrice Clayre began studying Sa'ban in the 1960s. In 2013 she published a trilingual Malay-Sa’ban-English picture dictionary, by which time the changes to village life brought about by the road had become tangible.  In 2016, Annabel travelled the length of the road with Dr Clayre’s son, anthropologist Alasdair Clayre, and Semion Balan and Gareth Lihan from Long Banga,  filming and interviewing people about the road, their languages and their ways of life.

They started with simple questions about how the arrival of a road affects the people living along it, and how a minority language fares under the changes a road brings. But a line through the rainforest that links communities, which used to be separated by many days travel on foot or by boat, also links into other lines that criss-cross the globe, following the long flow of capital, raw materials, and religion.