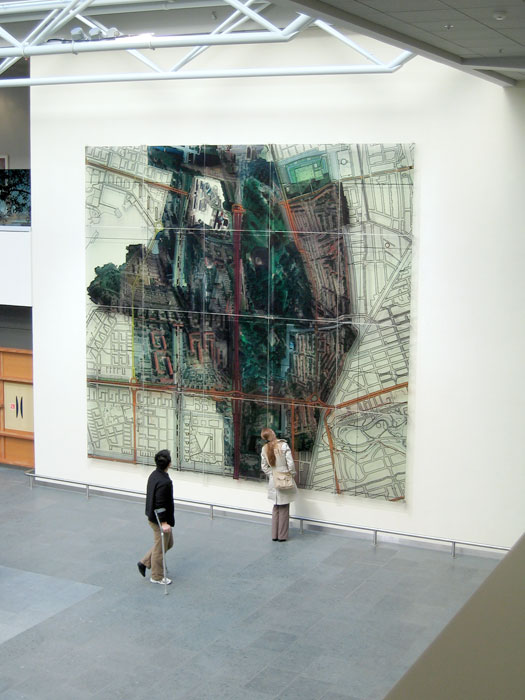 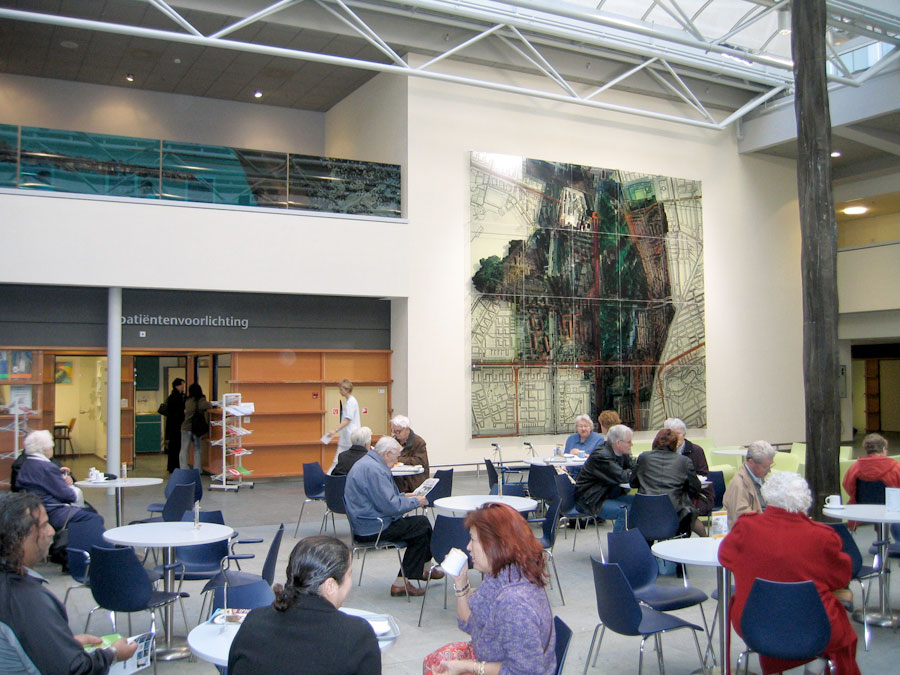 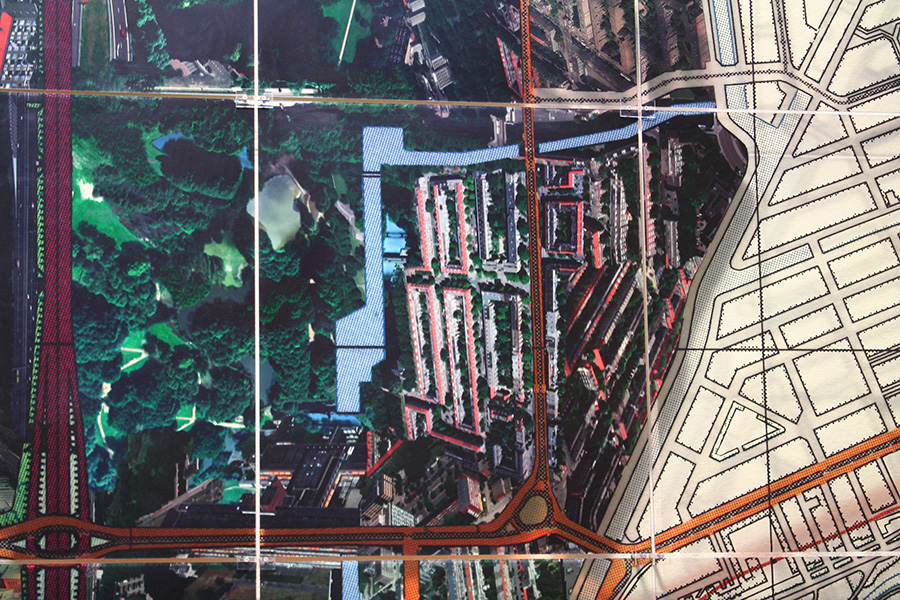 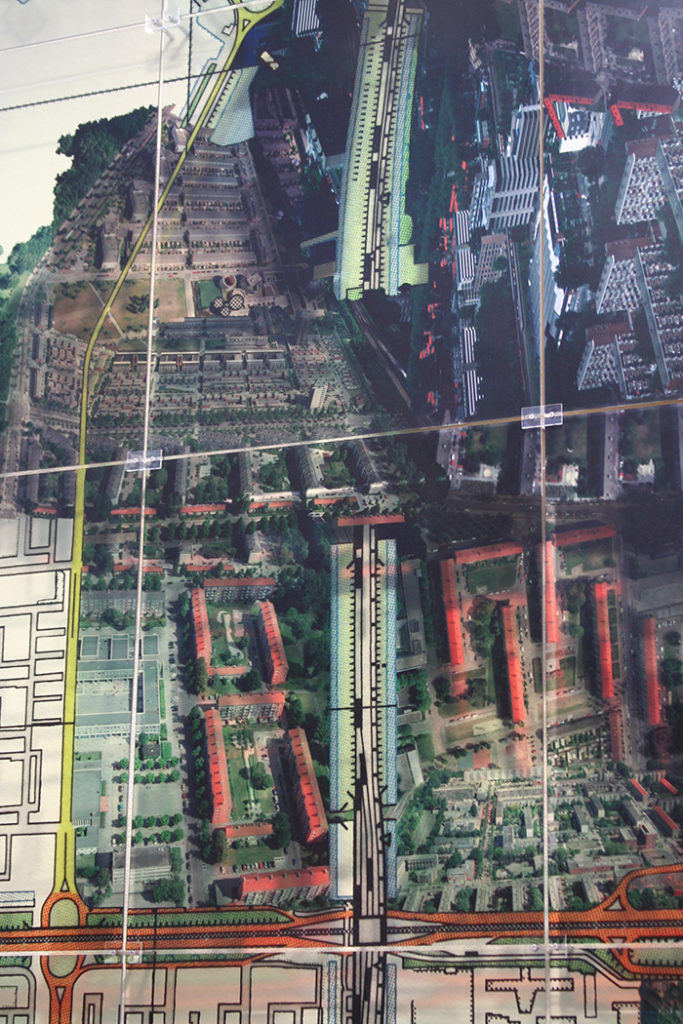 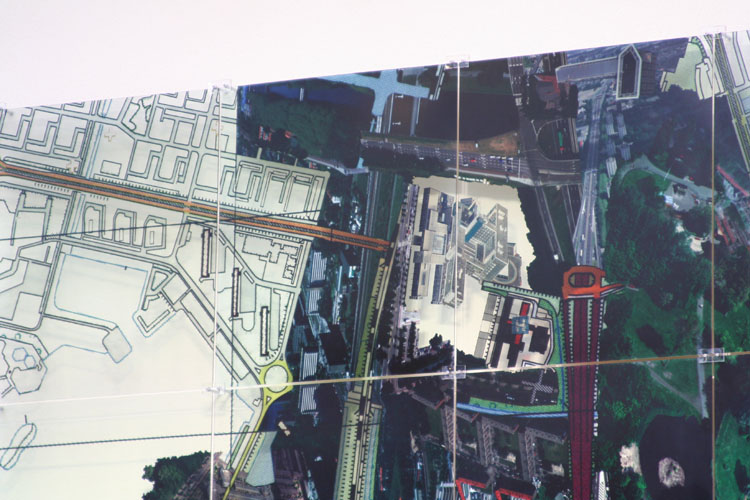 This artwork was unveiled by Job Cohen, Mayor of Amsterdam, on Friday 19 November, 2004, on the occasion of the official opening of the St Lucas Andreas Hospital (SLAZ) in Amsterdam.

The underlying structure for this work is provided by a map of the area in Amsterdam West around the St Lucas Andreas Hospital. Howland carefully erased the background from the map, while leaving all the lines and markings intact. Into this she digitally inserted cut-out aerial photographs of the same area to form a delicate and complex montage of cartographic and photographic details. Running down the centre of the work is the map’s representation of the A10 Ring motorway, which divides early 20th-century, pre-war expansions of the city inside the Ring from postwar developments outside the Ring.

Although the photographic elements correlate with their locations in the map, the viewpoints they present allow viewers to read the images in different ways. From a distance you can identify the structural organisation of this part of the city, while closer examination allows you to explore unusual angles of recognisable places or become absorbed by intricate details.

SLAZ was formed by the merger of St Lucas Hospital, at this location, and Andreas Hospital, which was demolished soon after the photographs for this work were made. Perspectives was commissioned by SLAZ to mark this moment in the hospitals’ histories. 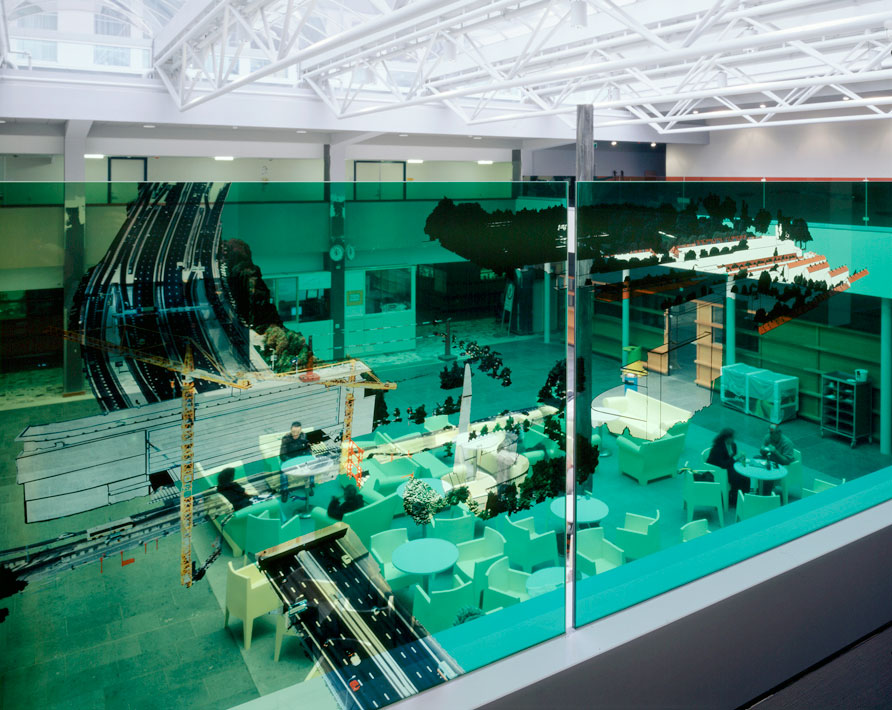 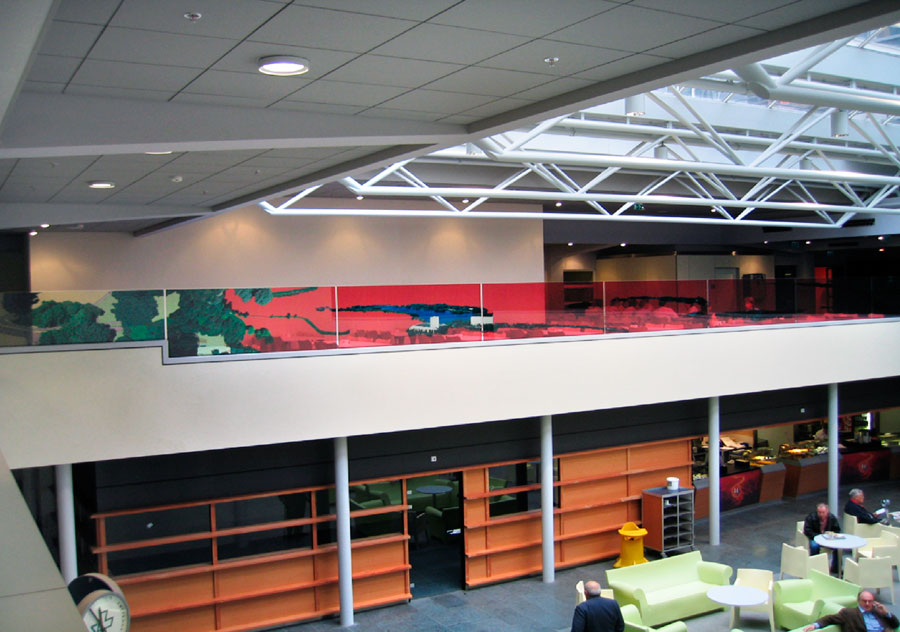 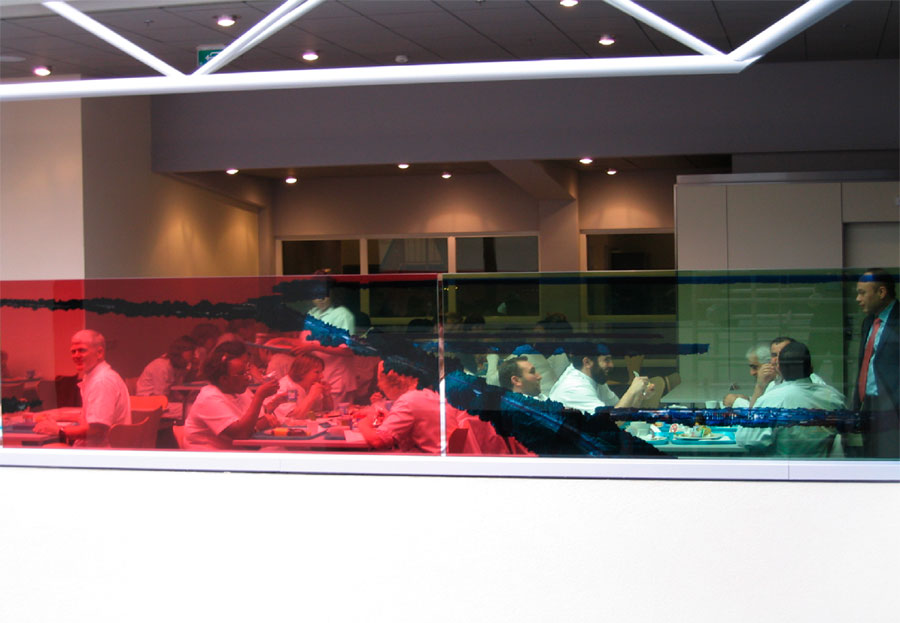 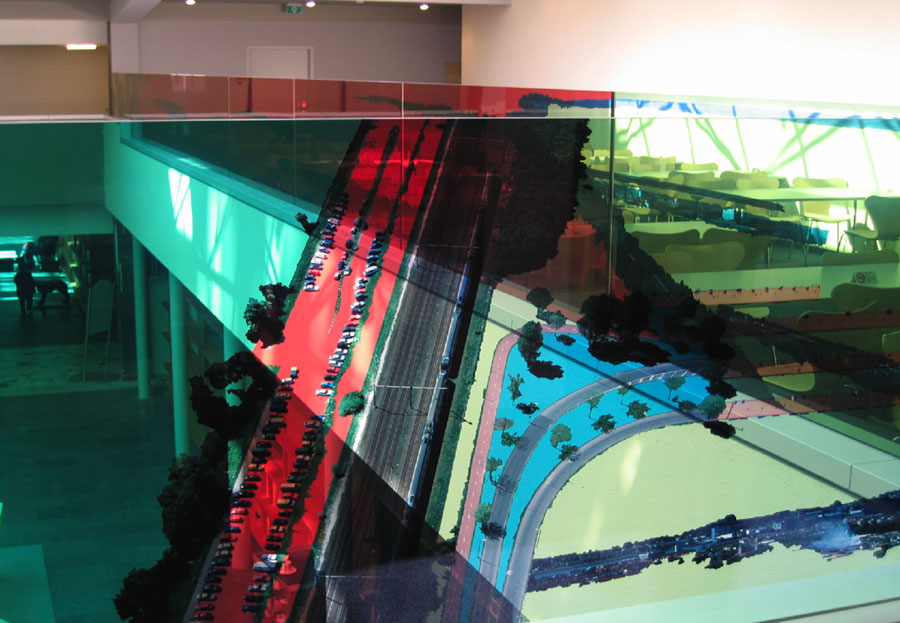 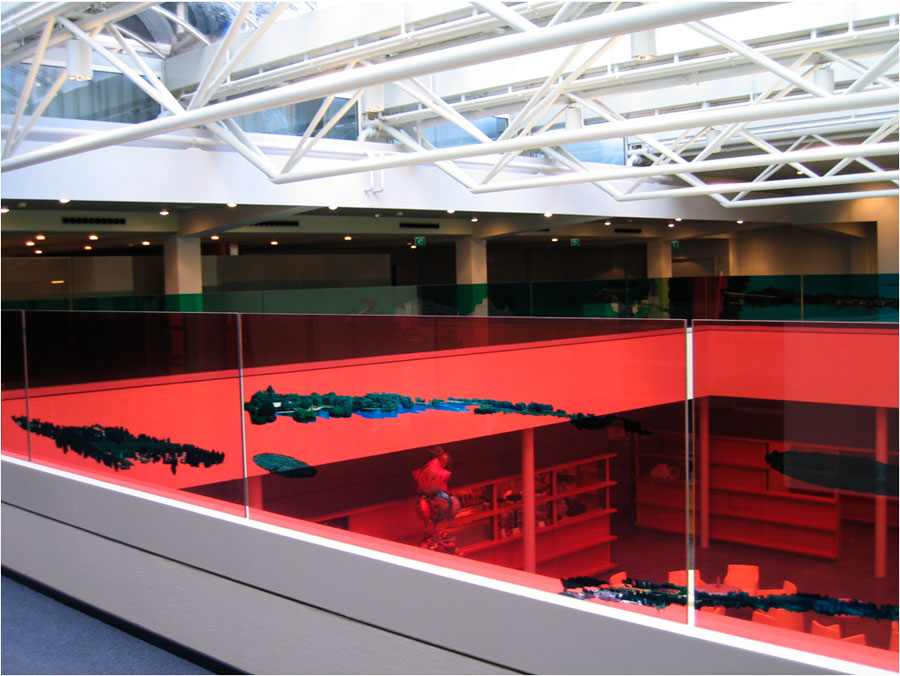 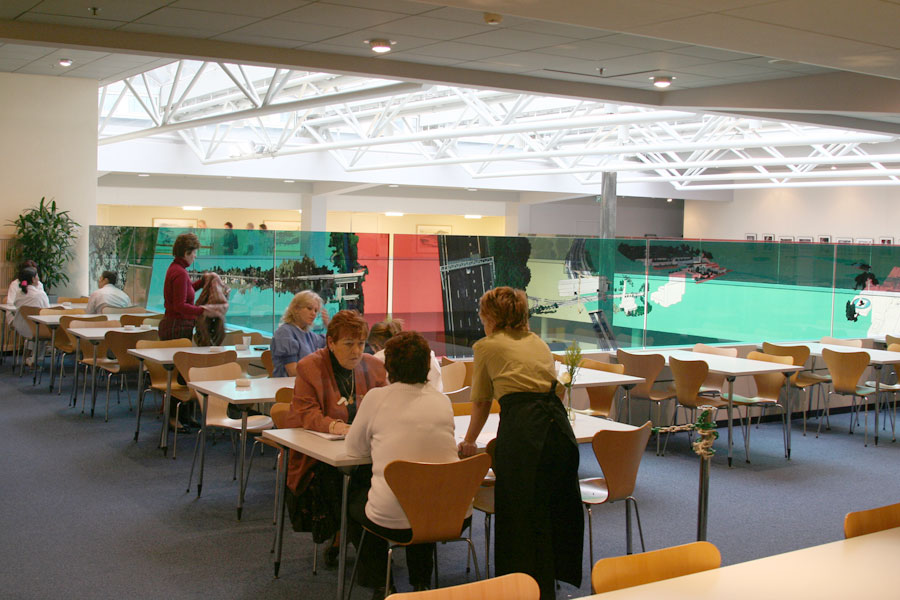 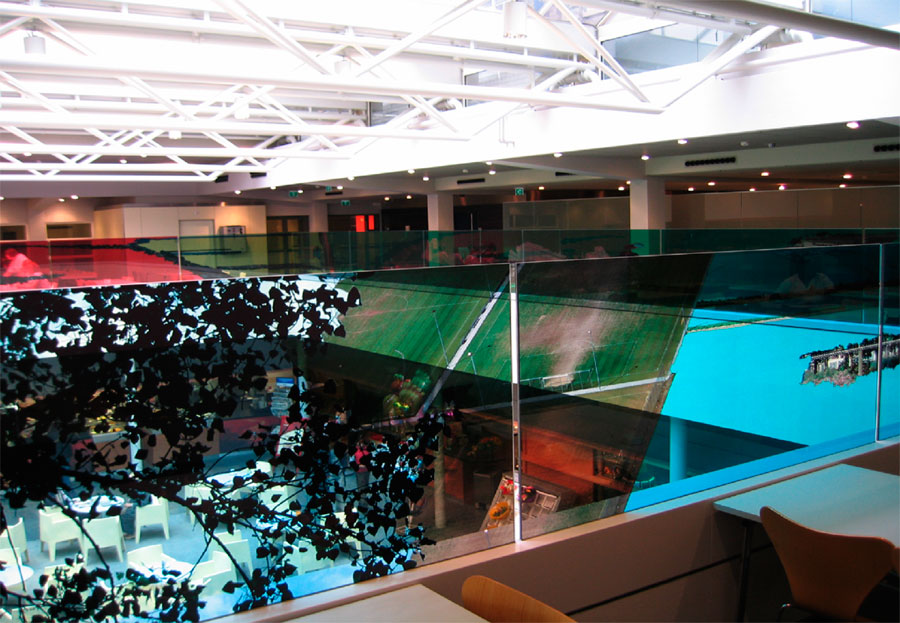 WEST is a glass balustrade that stretches around three sides of the central hall of the St Lucas Andreas Hospital (SLAZ) in Amsterdam. It forms a screen between the staff restaurant on the first floor and the public space of the hall below.

The photographic elements are extracted from photographs of the area around the hospital in Amsterdam West taken from a helicopter and on the ground. The coloured planes are derived from a topographical map of the area. In our passage along the screen from Rembrandt Park on the left and Erasmus Park and a sports field on the right, we move through vertical shots and bird’s-eye views of this part of the west of Amsterdam in 2002. Passing along different planes of colour we see cut-out pieces of Sloterplas (lake), railway tracks, Amsterdam Docks in the distance, SLAZ under construction and major building work near the A10 motorway in Bos and Lommer.

West was commissioned as part of the transformation the hospital underwent when the St Lucas Hospital at this location merged with Andreas Hospital, now demolished.
The balustrade is 45 m long and 0.95 m high and was commissioned by Amsterdam Fonds voor de Kunst. 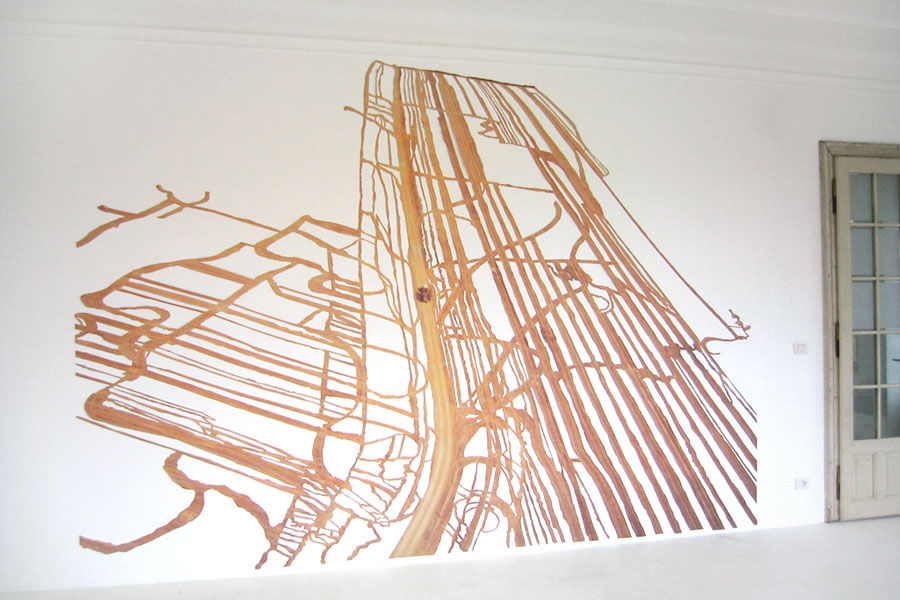 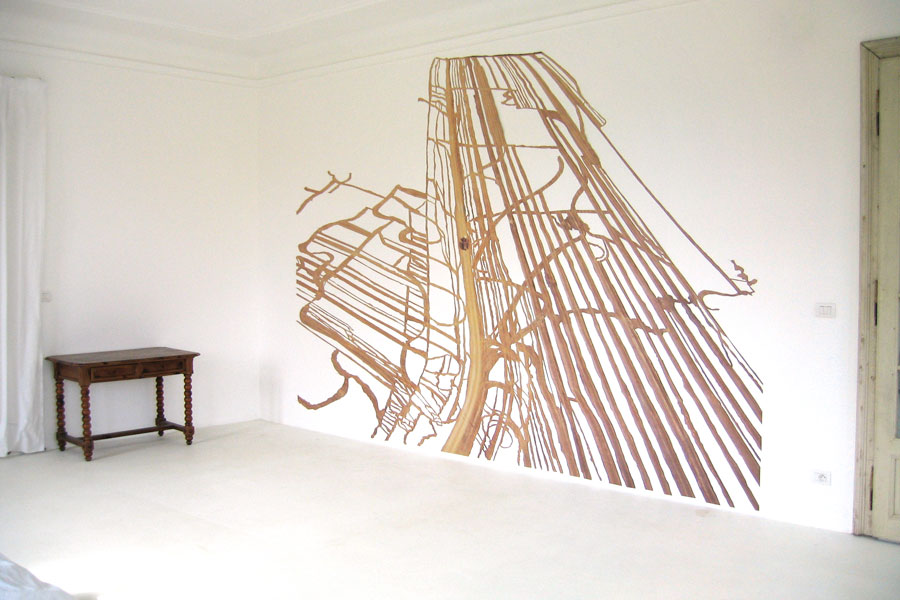 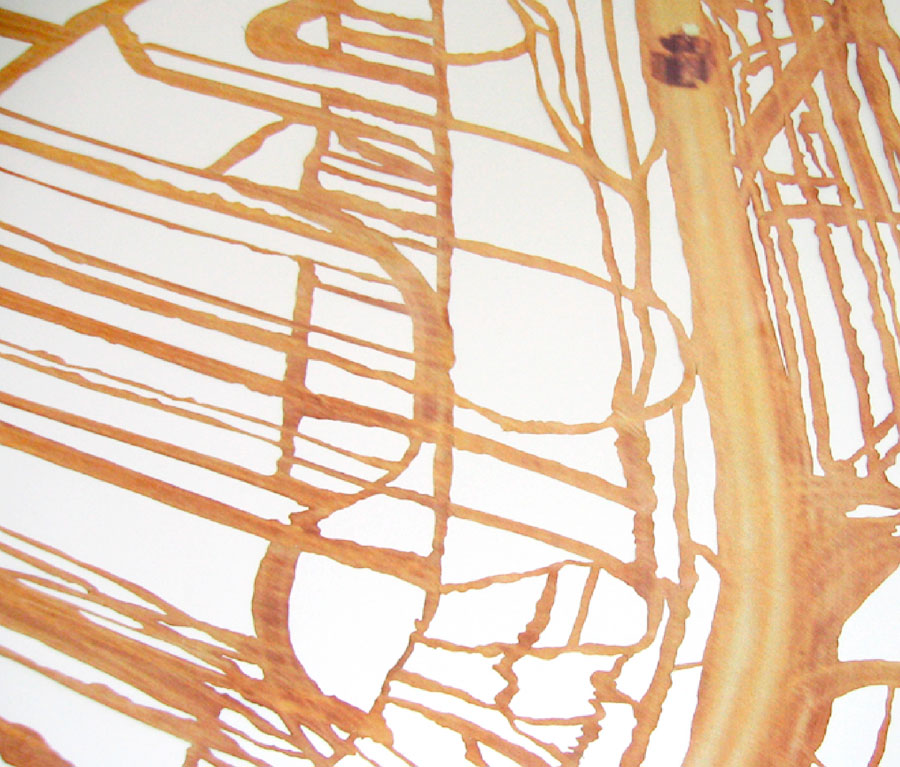 Trebesice Tracks (2004) was commissioned by Alberto di Stefano for what is now called Suite B - “The Corner Room” at Chateau Trebesice, near the Czech town of Kutna Hora.

To make Trebesice Tracks I chartered a small plane and took aerial photos of the area around Trebesice. The image was then enlarged, printed onto a single piece of thick vinyl, cut out and pinned to the wall. The opening of Trebesice Tracks was accompanied by a solo show Stay at Futura, Prague.